What is it lately with cards I thought were long gone, showing up in my mailbox?  This was a fantastic surprise to get Gene Larkin back.  He was one of my favorite players on the Twins teams of the late 80's-early 90's. 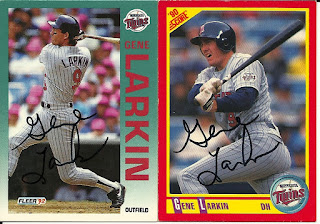 Posted by Laurie at 6:27 PM No comments:

Shane Peterson was a minor league TTM that I had written off because it had been over a year.  I couldn't believe it when I got it back today!  WOW!  Shane is currently part of the A's system.  He was traded from the Cardinals to the A's in the Matt Holliday deal. 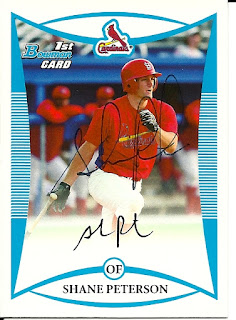 Next up, Chris Carter.  He was part of the A's magical season this year!  This is the second time I've been successful with him 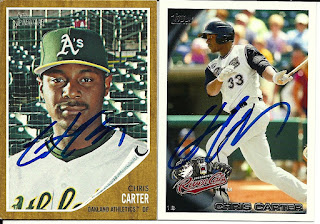 Another success from former Twin Mark Davidson.  This was great, except the 1988 Fleer; when I got it back, it had a cut in the lower left corner.  Bummer. 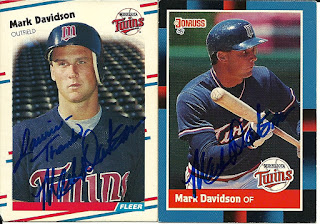 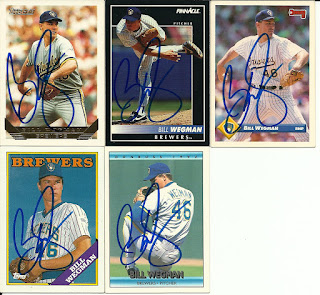 Posted by Laurie at 9:44 PM No comments:

I bought a couple of things off of ebay, too, last week, besides doing the Zistle trade.

First item won was a couple of Wil Myers cards.  He's the future of the Royals! 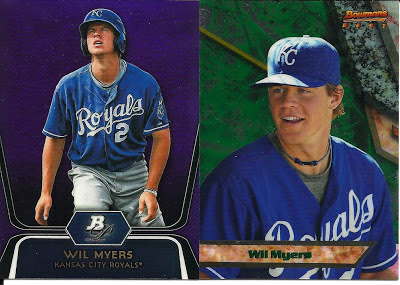 Next item won was a lot of you pick'em 2012 Topps Update.  In a previous post, I had talked about my desire to have all the Topps All Star Cards from this year, since the game was here in town, and I was able to go to all of it.  I doubt I'll be able to snag any of the futures cards, or any jersey cards, for that matter, but, hey, some is better than none.  Here's some highlights:


Here are some other cards that highlighted my All Star week here in Kansas City:

Posted by Laurie at 9:18 PM No comments:

Email ThisBlogThis!Share to TwitterShare to FacebookShare to Pinterest
Labels: All Star Game, Things I bought

I did another trade on Zistle, with a guy who I had done a trade with before.  Thanks jkgrice for hooking me up with some cards for my player collections!!  I didn't scan them all, but here are a few of the highlights:

This first one is a nice Ryne Sandberg from the 2002 Topps Archives Reserve. 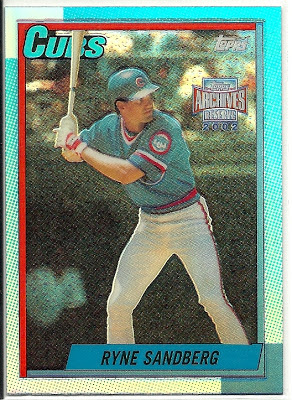 Next up, a couple of Mark Grace cards for my collection: 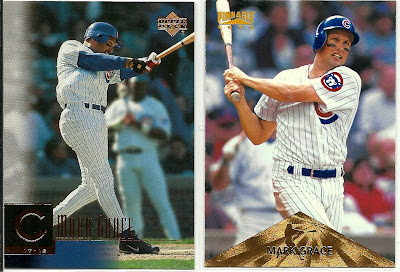 Finally, a few others that I thought were cool: 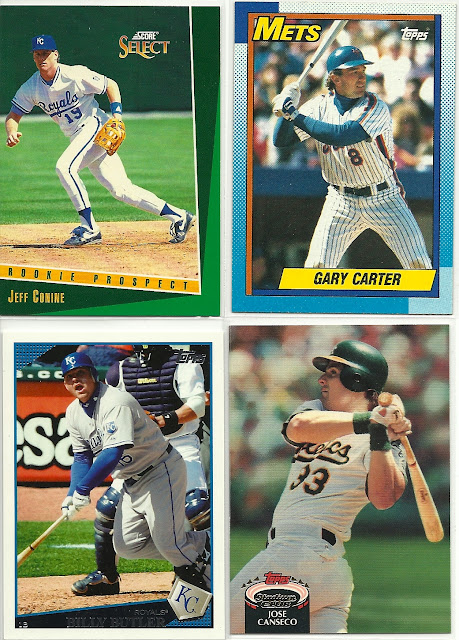 Posted by Laurie at 9:02 PM No comments:

I finally broke down and bought a jumbo pack of 3 2012 Topps Update.  I am not going to collect the whole set, just the All Star Game cards.  I think it would be neat because the game was here in Kansas City, and I was able to attend all the events at Kauffman Stadium.  Here are my needs:

The non-All Star cards are those of my favorite players that I am trying to get for my team/player collections.  If you could help me out, let me know, and I can see if I can help you out!
Posted by Laurie at 3:03 PM No comments:

A couple of trades via Zistle 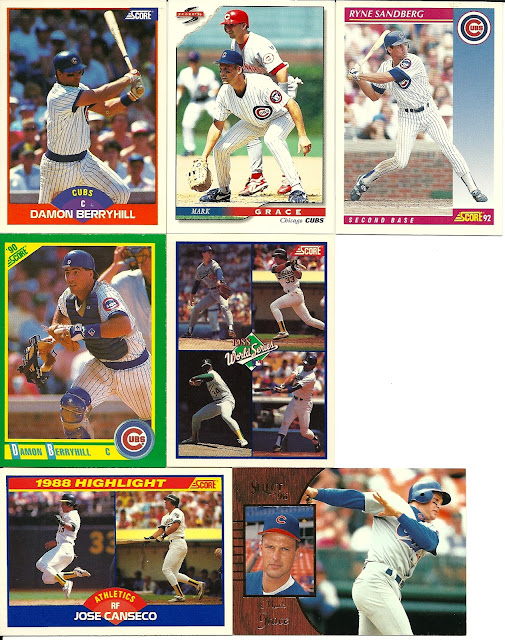 My other trade was with  Phil44.  I got some player collection cards, and I was able to trade away a ton of 1990 Fleer common cards that he needed!  Here is what I scored:

B.J. Armstrong played his collegiate basketball at Iowa.  I couldn't pass up getting his rookie card.  It's only the second card I have of Armstrong. 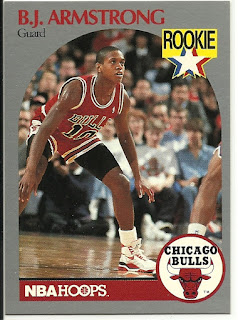 Here's the first card I have of him: 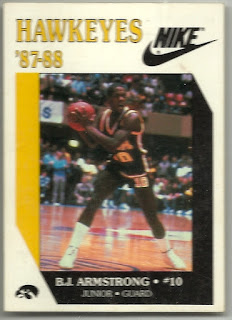 I can't even tell you where I got this card, but there was a team set put out, and he was a part of it.  I still have some of the other cards from this set, but I lost some of them.  I blame it on being young and stupid.

I was able to add two cards to my player collections.  Sorry the scan is so poor. 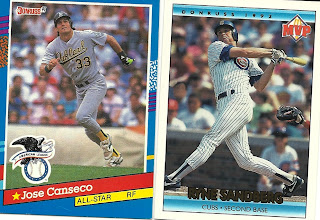 I decided to re-start two player collections.  Troy Neel and Jeff Conine have always been a few of my favorite players, but I have never actively pursued them, until now.  I actually have a TTM out to Jeff Conine right now.  I hope he sends it back!  I have had success with him before. 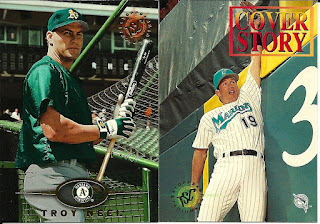 Tim Costo is another former Iowa Hawkeye.  I have this card, but it was demolished when I got it back in 1991.  I came across this and had to get it.  It was a bonus when I got it because it was a Tiffany version!  I also have a TTM out to Mr. Costo.  I would really like it back, but it has been awhile. 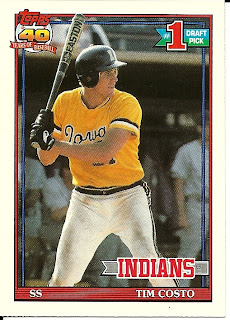 Finally, Dan Ellis.  These are the first hockey cards I own!  I was able to watch Dan play his collegiate hockey at University of Nebraska at Omaha.  I was a big fan of his when he played for the Mavericks! 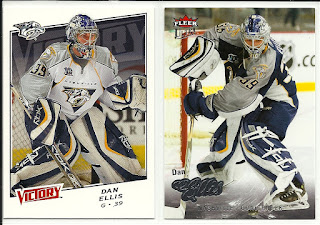 Posted by Laurie at 8:24 PM No comments:

I haven't been able to post in a while, or send anything out.  I have been out of state dealing with my ill grandfather.  :(

While I have been gone, I got a number of TTMs back.  Let's get to it!

First up, Jim Corsi.  I targeted Jim because he was a member of two of my favorite teams, the A's and Marlins.  Interesting auto!  I'm not sure how many days it was out; this TTM was a victim of my lost spreadsheet!

Barry Lyons, former New York Met and catcher.  I love both of those things! 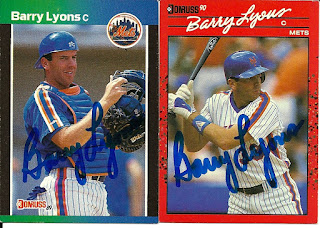 This next one was one that I thought was long gone, which was a bummer because I sent a 2011 Heritage and Allen & Ginter.  Thank you, Jonathan Sanchez, for signing my cards!  He started the year with the Royals, and was traded to the Rockies.  It's too bad things didn't work out for him here in Kansas City.  I always worry when players get traded, the mail doesn't go with them. 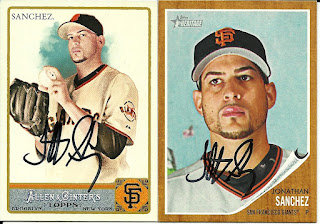 I sent mail, again to Mark Melancon and Kevin Tapani.  I was successful, again!  Thanks guys! 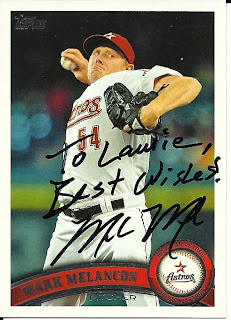 I also received another return to sender.  I was really hoping to score Chris Donnels TTM.  He's a former Met.

Lastly, I sent mail to Michael Cuddyer.  I had been reading that he signs one card.  I sent one card, only to get it back unsigned, and it says to enjoy the enclosed baseball card.  The only one enclosed was mine!  He now does autographs for charity.  The Tigers do the same thing.  Here's the link to the Rockies charity (who signs and how much):

http://colorado.rockies.mlb.com/col/community/request_guidelines.jsp
Posted by Laurie at 7:50 PM No comments:

Sorry I've been unable to post for a while, it's been a busy two weeks.  However, during that time, my mailbox has been relatively empty, except for the last 3 days, when the mail has started to roll in again.
Wayne Kirby sent me some mail today, in fact!  He's currently the First Base Coach for the playoff bound Baltimore Orioles!  My man just had a business trip to Boston, and had a layover in Baltimore on the way there and back.  He brought me back a charcoal cartoon Oriole t-shirt!  It's awesome and I hope the O's go far!!  I'd love to see a A's vs. O's AL championship series.  I know, boring for most, but I'd love to see it! 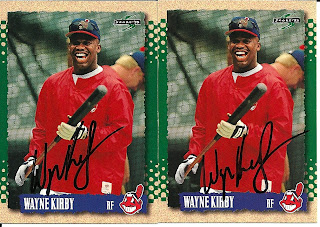 Next up, mail today from Pat Rapp.   I went after him because I love the old Marlins uni's.  I know no one else probably does, but I did.  I prefer the Marlins inaugural uni's over the uni's they wore this year. 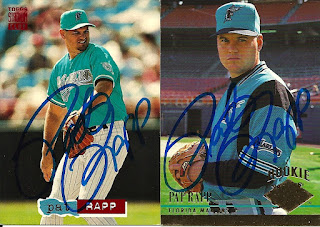 Lou Marson replied to my TTM last year, and I decided to try again, and he was, again, nice enough to return my request.  The Indians had a tough year.  Hopefully, they'll get things turned around next season (but not enough to beat the Royals!  LOL)  The 2011 Topps card had a smudge on it; the back of the Heritage card had a smudge mark, too. 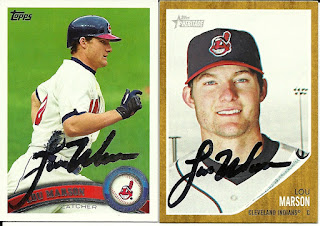 Next up, Colby Lewis, of the wild card Texas Rangers.  I really hope the Orioles win (see my post above).  He signed 1 card, which was the Gypsy Queen.  He didn't return my 2011 Allen & Ginter. 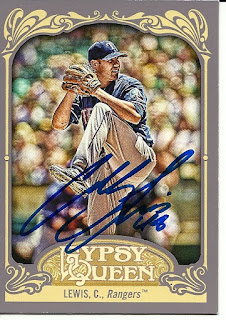 Tyler Greene was a TTM I wasn't sure if I'd get back or not.  He was traded from the Cardinals to the Astros this year.  The Astros will be joining the AL next year.  It seems weird, but, I remember when the Brewers were in the AL!  I still have some cards of the AL Brewers! 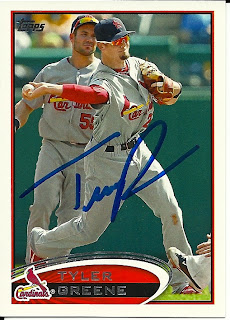 Mark Kotsay was another TTM that I thought would be a long shot to sign, but I got this back Monday, and it was a great surprise! 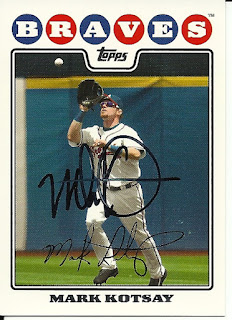 I also got two return to senders, one from Billy Ripken (c/o MLB network); weird, right?  The other was from Jayhawk Owens.  Who is Jayhawk Owens?  He was a rookie catcher for the expansion Colorado Rockies, back in the day.