I got another TTM back that I thought was looooonnngg gone, from Ben Zobrist.  I sent this late last season, and got it back yesterday.  He also included a testimony card. 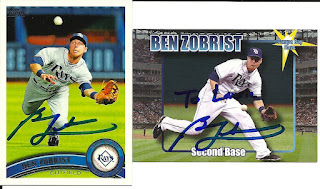 Next up, is Tom Milone.  He was traded from the Nationals to the A's as part of the Gio Gonzalez deal.  He's helped the A's become a wild card contender!  The signature is a little bubbly on the Topps card.  I didn't prepare the card well enough! 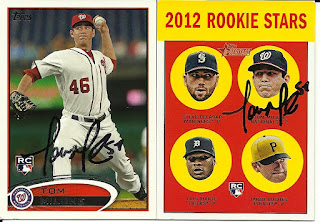 Posted by Laurie at 2:10 PM No comments:

Well, I thought this one was long gone.  I wrote it off months ago.  I hated it, too, because Tom Herr was a player I liked, and I had read that he signs TTMs.  No such luck for me...UNTIL yesterday!!  It is my longest TTM return...509 days!!!  Thank you Mr. Herr for the cards!!! 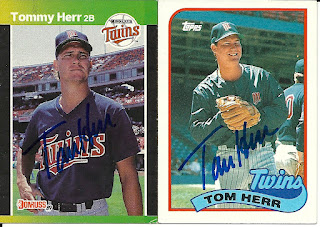 Three TTMs back this week:

Tom Brookens is currently a coach for the Detroit Tigers.  I had read that he only signs one, so that is all I sent him.  I am starting to appreciate the 1987 Fleer set, again. 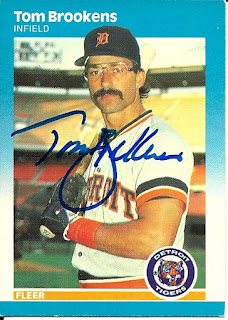 Next up, Bill Schroeder.  He's currently a broadcaster for the Brewers.  He signed the cards in pen.  It doesn't show up well on the scan. 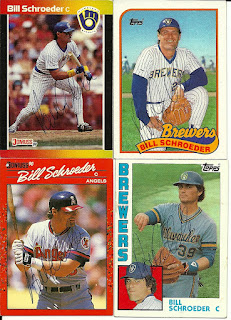 Last, is Eric Young, Jr. of the Rockies.  Another personalized card! 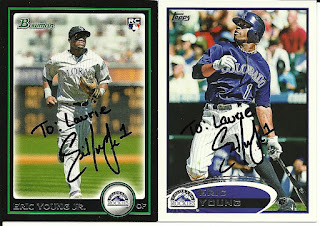 I was lucky enough to score tickets to All Star Sunday (Futures Game and Celebrity Softball Game), Monday's Home Run Derby, and Tuesday's All Star Game.  I also got to go to the Fan Fest in downtown KC on Saturday and Monday morning.

On Saturday, at Fan Fest...lots of photo opportunities, which I love.  I thought that MLB was doing us a favor by giving us a card that would let us go to the computer to have all of our photo opportunities/experiences all in one place...WRONG!  You have to buy the photos...$17.99 each.  Debbie Downer.  The Game Saving Catch photo that I am in is awesome!  Lots of free stuff...popcorn, foam fingers (mini), towels, make your own baseball card, water bottles, etc.  The Tiffany's exhibit was awesome.  It was all the awards that were going to be given away in 2012; from AL & NL MVPs to the World Series trophy.  The Hall of Fame exhibit was also neat.  Can't wait to see Ron Santo get inducted!!  Topps had a booth there.  If you brought in 3 wrappers, you could get 1 of 6 Limited Edition All Star cards.  I picked Eric Hosmer, because, in my mind, he's the man!  I was mainly there on Saturday to catch a glimpse of Andre Dawson and get Wil Myers' auto.  We were in line for Frank White's auto, but someone was throwing a fit and wanted to leave and refused to wait in line.  I can't believe going to Fan Fest with a 43 year old would be worse than going with a child, but it was. 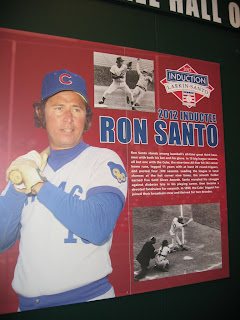 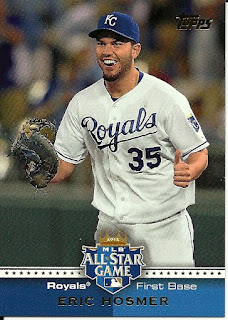 
Sunday was All Star Sunday at the K.  Best part of the day, Royals prospect Wil Myers having an awesome Futures Game, and Cubs prospect Jae-Hoon Ha hitting a home run!  The celebrity softball game was also fun.  University of Kansas men's basketball coach Bill Self got the "boo-birds" from the Mizzou fans in the crowd, and he showed them by hitting a home run!  Kansas City Chiefs QB Matt Cassell, also, was the recipient of the "boo-birds."  American Idol and Blue Springs, MO native David Cook played a mean left field. 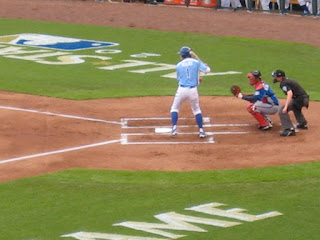 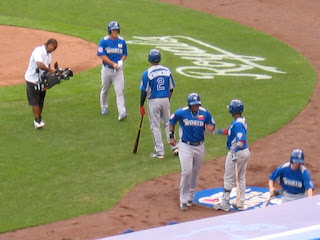 Cubs prospect Jae-Hoon Ha getting congratulated after his home run. 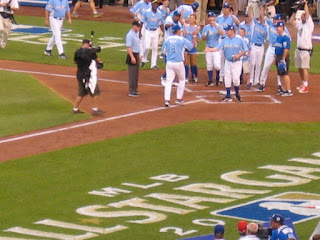 KU men's basketball coach Bill Self hitting a home run in the Celebrity softball game after getting "booed."


Monday, I went back to fan fest, mainly to wait in line for Tony Gwynn's auto.  While waiting in line, I got to see Bud Selig.  I noticed that many auto seekers were pushing kids out of the way and really taking advantage of them.  This made me sad.  Although I was waiting in line for Tony Gwynn, I was not about to shove a kid out of the way to up my place in line.  Many of the adult auto seekers had 10+ balls, etc. autographed.  I didn't get one auto either day at fan fest.  I was obviously doing something wrong (see Saturday fan fest paragraph).  I hit up the Topps booth, again, and score some free cards (Series 2).  I also took a look at the booths selling cards, and picked up 100 Royals cards for $5.  Here's what some of what I got for five bucks: 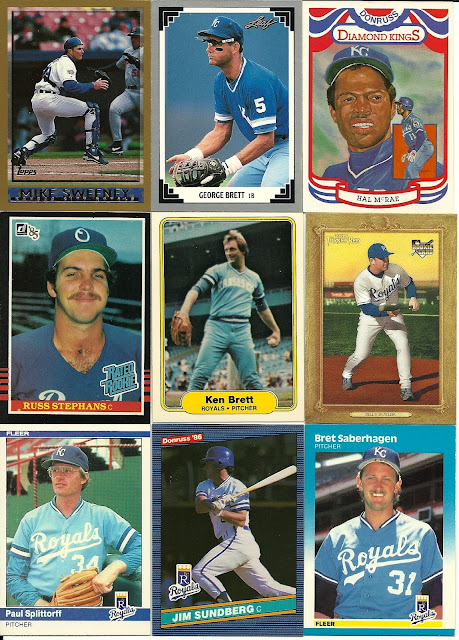 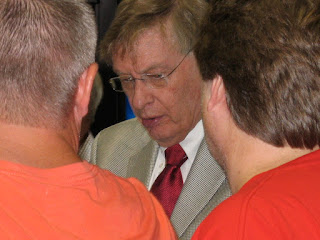 The closest I got to anyone famous at Fan Fest, Bud Selig. 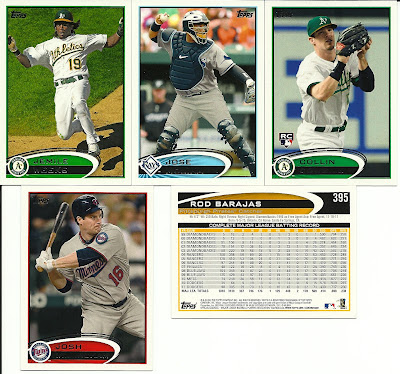 
Monday night at the K was our first tailgate of All Star Week.  Hamburgers, watermelon, spring salad, chips, and Bud Light at my tailgate party of 2.  I was really pulling for Mark Trumbo to win.  He made a good showing and ended up in the second round.  I was not expecting the "boo-birds" that Robinson Cano got.  Although, I thought it was funny that he went 0-10! 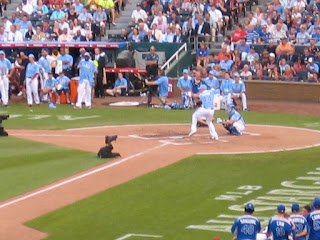 Tuesday was the big day.  Tailgating day #2.  Same menu.  It was almost a tailgating fail, as we could not get the chimney starter to light.  Best parts of the game:  George Brett throwing out the first pitch, nice ovation for Chipper Jones, and Bryan LaHair from the Cubs getting to play.  Not so great parts of the game:  Bryce Harper showing his inexperience by committing a base running error and dropping a ball in the OF.  I also really wanted a LaHair All Star game jersey, but they didn't make any!  They must have made just one and gave it to him.  I couldn't find one at the Royals store, or at the Majestic store at Fan Fest. 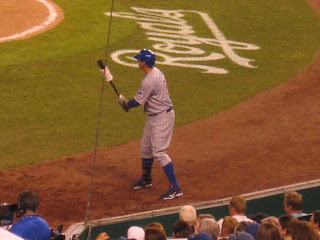 Bryan LaHair of the Cubs in the on deck circle.
Posted by Laurie at 4:08 PM No comments:

Email ThisBlogThis!Share to TwitterShare to FacebookShare to Pinterest
Labels: All Star Game, Things I bought, Topps

I am totally digging Zistle. I have now completed my second trade.  Through both trades, I have managed to get rid of cards I didn't want, but got cards I wanted in return.  I have almost doubled my Terry Steinbach player collection through these two trades. 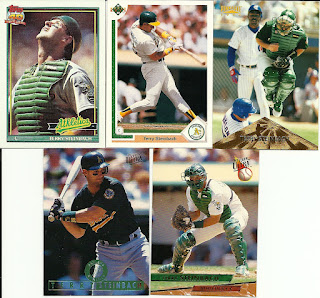 Some other cards I got through the trade were some Royal and Cubs cards that I wanted, as well as an Alex Gordon and Ryne Sandberg to add to my player collections! 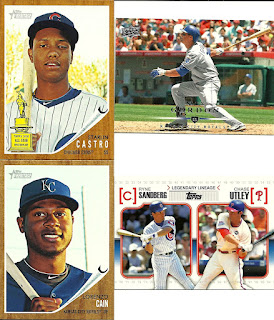 Posted by Laurie at 3:18 PM No comments:

Rod over at Padrographs was giving away random cards sorted into team.  I decided to go ahead and bite on the Oakland A's cards because they are one of my favorite teams.  He really wasn't requesting much in return, but I searched his want list and sent him some off of that list, as well as a few others I hope he enjoyed.  Here is some of what I got: 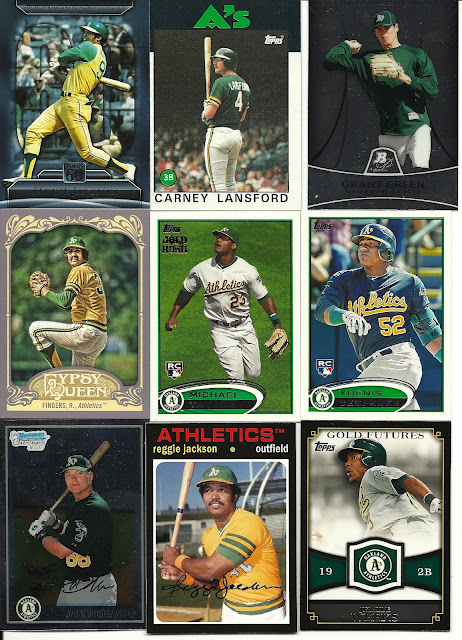 Thanks again Rod!!
Posted by Laurie at 3:13 PM No comments: 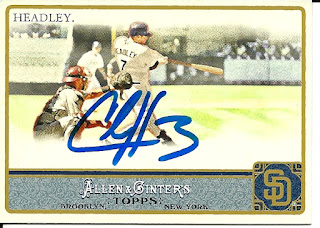 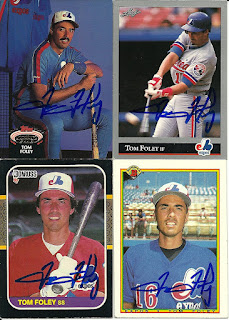 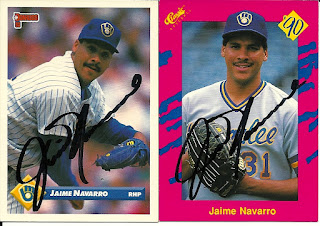 I have completed my first trade on Zistle!  I got some Terry Steinbach cards that I needed to add to my collection:

The 1989 Donruss All-Star was a duplicate for me, but it was just a throw in, which was great.  The 2004 Topps was also a throw in, and was an awesome surprise!
Posted by Laurie at 5:05 PM No comments:

I got an extra card!!

Lots of returns over the weekend!!  One of them was a great surprise.  I sent a card to Gary Matthews, and got it back, but as bonus, he signed a 1982 Donruss and gave it to me!  I think that is awesome! 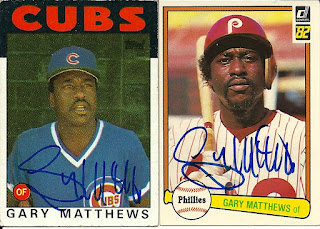 Next up, another former Cub and another 1986 Topps TTM via Keith Moreland.  He's currently doing Cubs radio broadcasts.  I am having a new appreciation for the 1986 Topps set! 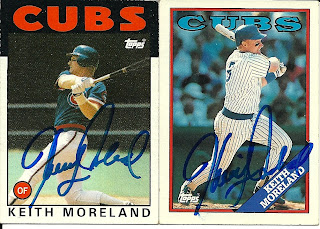 Mitch Moreland is currently on the disabled list and is signing his TTMs!  I had read that he was signing 2 at a time, however, he only signed one for me, and sent the other back.  That's ok with me because I really wanted his auto!  I wonder how players decided which one to sign when only signing 1 of 2?  I had sent a 2010 Bowman that wasn't signed. 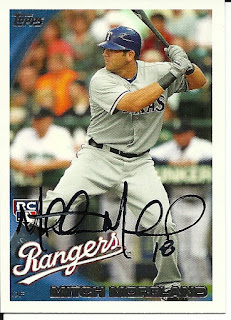 Finally, one back from retired NFL star Keith Millard.  I sent 3, and he kept one, my 1987 Topps. 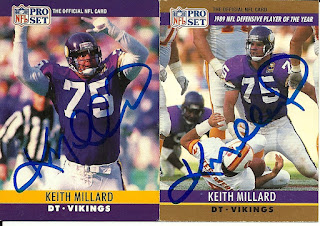