When I was in Boston for the Cubs/Red Sox series, I bought a pack of cards that were random for $2.00. I have decided to collect as many autographs out of that pack as I could. I have been limited in my success; I have sent out 11, and have only received 2 back. My second player back is Jerry Don Gleaton, former Royal, which I am also collecting. 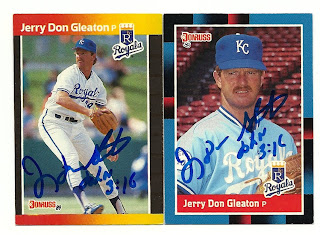 My second graph back this weekend, courtesy of Scott Hattieberg, who is featured in the new movie, Moneyball. Here's the link: http://moneyball-movie.com/
I have also been trying to collect autographs from every MLB teams coaches/front office/broadcasters. I sent out the rest of my mail today, before the end of the season. Hopefully, I will have some success. Anyway, Scott is currently in the Oakland A's front office. 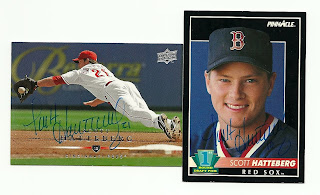