I have a lot of good stuff to report for this week!  Let's get to it!

First up, my favorite return, but, at the same time, my most disappointing return.  If you pay any attention at all to my blog, the Cubs are my favorite team.  When I got this back, I was super excited, but then when I looked at the cards, the signature did not come off well, on either card, with the Pro Debut card looking like it was hardly signed at all!  :(  It's probably my own fault; I only prepped the area of the card where players usually sign, not the top of the card (ie the Pro Debut card).  You can hardly see the signature on the Pro Debut, but it's up by his elbow.  The signature on the 2011 Topps also didn't come off great; I'm really surprised because, again, I prepped both cards. 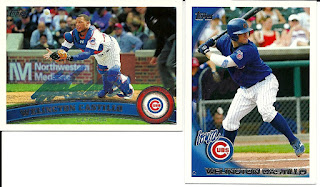 Next up, Walt Terrell.  I targeted Mr. Terrell because I don't have many Yankee TTMs.  I know Walt Terrell is not someone who you automatically associate with the Yankees, but it helps fill up the page in my TTM book! 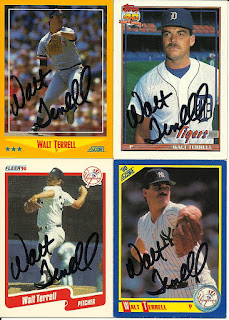 This next return was a nice surprise; I thought it was long gone!  Scott Coolbaugh is currently the hitting coach for the Rangers!

My first trade came via this blog.  Thanks to Tom from The Angels, In Order for hooking me up with some of the 2012 Bowman Platinum I needed.  I still need quite a few, and they are listed on the right of this post, if anyone has any dups they want to trade!  I was able to hook Tom up with some cards he needed from his want lists, as well as a few I hope were a nice addition to his collection.

These three cards are a sample of what I received.  I love the  Mets rookie, especially the "KID 8" patch the Mets wore this year!  I also have a soft spot for Jarrod Parker; he helped lead my fantasy baseball team to an almost playoff birth, but team Sponge Babe fell a game or two short.  Lastly, I couldn't overlook Pablo Sandoval; he must be a very talented player to be able to blow a bubble and bunt all at the same time, something I know I could not do!

Second trade came via Zistle, and it helped fill some of my player collections.  Thank you to Rosenort for helping me out!  Check out his blog at:  http://condition-sensitive.blogspot.com/.  This was the first time I had send cards to Canada! 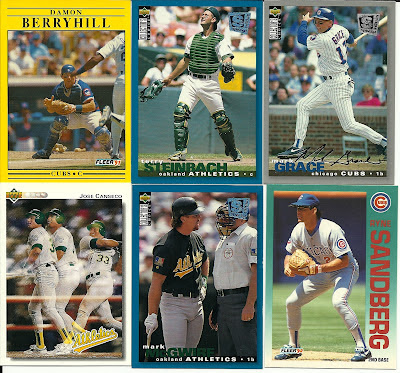