My spreadsheet was deleted! :(

I was out of town most of last week and I was working on my TTM spreadsheet prior to leaving.  I tried to open it Sunday to work on it, since I had gotten several TTM's while I was gone.  I was upset because I noticed that it was MIA.  I had a back-up, but I was stupid and haven't saved it since the beginning of July.  D'oh!  So, I have about 6 TTM's out that I can't remember who I sent them to, and many more out that I don't know the date I sent them, so I can't calculate how many days it took.  It's really a bummer because I have worked really hard at it!

Also, I am becoming very frusterated with Blogger.  I can see everyone's comments, but I can't reply to them, unless it's through e-mail!  I can't get it to leave my comment on the blog after someone's posted.  If anyone has any suggestions on how to fix this, please let me know!

First TTM while I was gone I got back from Jay Bell.  He's currently the hitting coach for the Mobile Bay Bears, AA minor league team of the Diamondbacks. 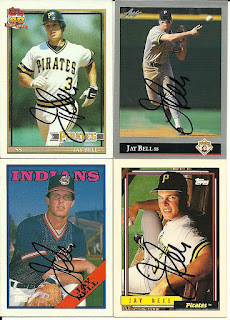 Next up is Brett Butler, who is currenlty the manager of Reno Aces, the AAA team for the Diamondbacks.

One back from the minors.  Thanks Trystan Magnuson!!!  He's currently in the Blue Jays minor league system. 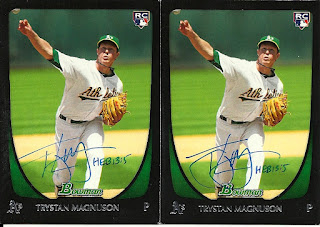 I also had two returns, which seems odd, and they both came back the same day.  One was from Joe Oliver, the former catcher from the Reds, and Paul Abbott, who was a former pitcher for the Twins, and the current pitching coach for the Lowell Red Sox.